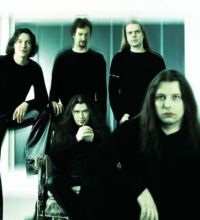 SR: What is THUNDERSTONE of 2005? What are you working under nowadays?
TH: We just finished our new record “Tools of Destruction” and are eagerly looking forward to its release on April 18th. After that we will do some promotion, gigs, summer festivals, and hopefully a longer tour in the fall.

SR: Where did the band’s title come from? Is it any way related to Tv series THUNDERSTONE?
TH: Actually it is not. We don’t get that series here in Finland, but I found my way to their website and was surprised. I donat really know where the name came from. Our guitarist Nino just thought it sounded like a “metal” name… and believe me, we tried everything else, but in the end Thunderstone just stuck.

SR: Please, tell us about your last tour, what was the most exciting and brightest moment out of this experience?
TH: The last tour was with Axel Rudi Pell, and it was more or less a second option tour for us. We had a good time and everything but the original plan was to go on a much bigger tour with Iced Earth. So, although we really enjoyed playing all the places, there was no mind-blowing experiences involved. I think the most memorable gig was in Paris in 2003 with Stratovarius, playing in front of 5000 crazy screaming people.

SR: Your musical stylistic is quite clear and precise, so are you going to change, mix the genres or work with the style which you’re most comfortable in for years now?
TH: I think we have found our own style now. We were first compared to Stratovarius all the time, but now I don’t think we’ll be haearing those comparisons anymore. In the future I see us doing the kind of music we like, as we have done so far. If that means mixing or changing genres, so be it. You have to be honest to yourself all the time, anyway. Otherwise there is just no point in doing this.

SR: Tell us about your project with Timo Tolkki.
TH: Hmmm… are you referring to us using his studio? Or him guesting on our first record? Whichever that is, Timo is an old friend of ours and has been supporting us from the beginning. I’m glad to see him getting better and Stratovarius back in business.

SR: How would you rate the state of metal music in Finland nowadays?
TH: Its hard to think it could get much better. Nightwish was one of the biggest-selling metal acts of last year, and they are just the top of the pyramid. There are so many good bands coming form Finland that it could be said there is sirt of a “Finland-boom” happening right now.

SR: How much is power metal popular in Finland for today?
TH: I don’t know what could be called power metal – we don’t like that label very much. But melodic heavy metal is doing great. Most melodic metal albums enter the charts, often at top ten positions. So… it’s very popular indeed.

SR: Tell us please about your forthcoming plans and projects?
TH: Like I said, the new album will be out soon and we’ll be promoting it for the next six months or so. After that, depending on how the album does, we’ll do some more promotion or start composing new material. That’s how the cycle of a band’s life goes.

SR: What would you like to wish to those who’s eager to become musicians?
TH: Practice hard and try to find the right people to start a band with. I’m lucky to be in such a great band, both musically and personally. It is also important to trust your instinct and not give up even if you’re not the next biggest band right away. Getting big in metal is a slow, but a rewarding road.

Thank Titus Hjelm for this interview.
All greetings and good luck!